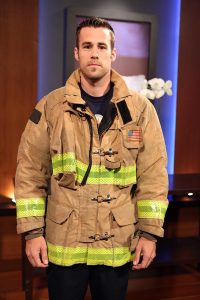 SHARK TANK – “Episode 524” – A guitar player from Dallas, TX hopes to sing his way into a deal for his service that helps people find and hire music instructors; a firefighter from San Diego, CA has come up with a simple way to stop costly, accidental fire sprinkler activations; two friends from Salt Lake City, UT show how they can turn fire and water into a battery charger; and two men from Chicago, IL hope the Sharks will get on board with their indoor trackless train that can be used at the mall or even private parties. In a follow up segment, Tiffany Krumins from Auburn, GA and creator of Ava the Elephant medicine dispenser gives an update on her business, which Barbara invested in during Season One, on “Shark Tank,” FRIDAY, APRIL 11 (9:00-10:01 p.m., ET) on the ABC Television Network. (ABC/Adam Taylor)
MATT SCARPUZZI (QUICKSTOP FIRESPRINKLER TOOLS)[/caption] If you own, live or work in a building with a Fire Sprinkler System, you will appreciate my interview with Matt Scarpuzzi, owner of QuickStop Fire Sprinkler Tools who has developed a tool that allows you to minimize fire sprinkler water damage to your building.

Since the mid 1940’s buildings of size and particular use have been built with an Automatic Fire Suppression System, or Sprinkler System. Early on, building owners found that the cost of installing a sprinkler system was off set with substantial discounts on Fire Insurance. Systems have proven over time to save lives and property from significant damage. [x_audio_embed][/x_audio_embed]   Sprinkler heads deliver between 30 -100 gallons of water per minute. When putting out a fire, this is great. Once a fire is out, the system will continue to run until the supply line is drained, which can cause significant building damage from water including mold. That’s what led San Diego Fireman Matt Scarpuzzi to develop the QuickStop Fire Sprinkler Tool. The QuickStop Fire Sprinkler Tool has been used and tested by firemen worldwide and saved property owners and insurance companies thousands in fire sprinkler damage avoided. In April 2014, Matt appeared on ABC’s Shark Tank. To learn more about Matt and the development of the QuickStop Fire Sprinkler Tool, check out my interview. Matt has generously provided an EXCLUSIVE DISCOUNT to our listeners. Listen and learn how you can save on a QuickStop Fire Sprinkler Tool purchase. For more information go to QuickStopTool.com. [author title=”About the Author”]]]>